Before Bumble and Tinder, there was only Myspace.  Back in the days when if you were dating someone, they were #1 on your top 8,   you used PimpMyProfile to edit your background to be his name in sparkly graphic letters, and your profile song was in dedication to your boo.

Back then you actually messaged someone with the intent of meeting up and hanging out.  You exchanged numbers, would maybe text or talk on the phone a bit, but you still got to know a person by being IN PERSON.

Flash forward to now, and dating can exist solely in an app.  You can learn where someone went to school, who their friends are, what kind of puppy they have, where they work, and what they look like shirtless, in a suit, and with their Mom, all from four photos and a short bio in a profile like this: 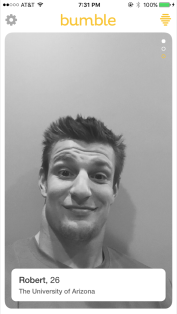 (For those of you who live under a rock and don’t know who this is, it’s Rob Gronkowski…)

Then-if you’re still interested after getting to know all of this about a person without having ever spoken-you have to come up with a clever opening one-liner to grab their attention and hope that it was clever/funny/cute enough to get them to choose to write you back, amongst the other 47 people they “matched” with who are all attempting to do the same thing. 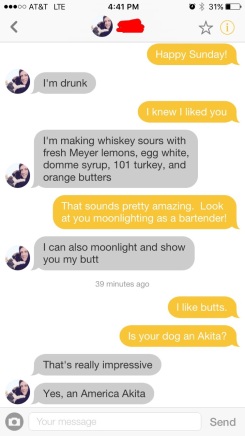 Bro.  I don’t give a fuck about your bourgie-ass drinks you’re making on Sunday afternoon.  I just liked your dog.

It’s a game.  You swipe and analyze people when you’re bored, without the intent of ever meeting up or getting to know the person.  But, if your conversation and witty banter happens to strike a chord, they just might ask for your number.  Only, now, it’s not like it was back in those Myspace days.  If they ask for your number, it’s because they think you’ve done enough talking now to be able to meet and hook up.  They now know everything there is to know about you, because they went the extra mile to ask the ever-revealing “How was your day?”  And if you take the conversation from the app to texting, they will most definitely want you to send them a pic (preferably something scandalous).  At which point all is lost, and you send them an ugly picture from when you got your teeth whitened. 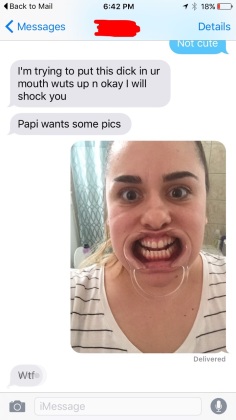 And there you have it.  The modern-day dating cycle.  Swipe, message, text, pic, maybe bang, repeat.

Which is why I’ve chosen to give in to the game, and try out my arsenal of captivating conversation starters.  If you can’t beat em, join em.  I like to take the bulk-messaging approach, rather than waste time trying to customize each message.

I figure, they’ll either:

A.) Not respond because they think I’m weird, which then, we wouldn’t have gotten along anyways, because they’re right.

B.) Say yes, and come back at me with something funny, at which point I’ll entertain them.

C.) Say they don’t have a dog and respond with confusion, to which I will say, “Oh…I do.  Do you want to be her Dad?” thus slaying them with all the game that I got. 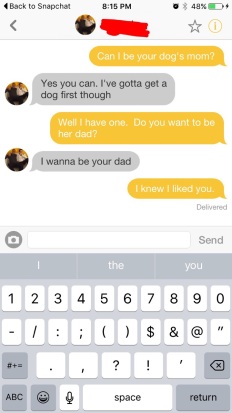 So far, I’ve been killin it in the modern-day dating world.  No dates yet, but plenty of screen-shotted conversations to send to my various group-texts of girls.

Sure, it was more personal and real then, and you got to know people in person rather than over the phone.  But, who’s to really say that the old way of doing things was all that much better?  After all, I did happen to stumble across my first love who completely broke my heart back then, Fillmoe Trev…

I guess the modern-day dating world really do be hard out here for a pimp.